The best day ever!!! Why I hear you ask… Because I discovered that the allotment has an apple AND a pear tree!!

I can’t believe we didn’t see this when we first visited to choose our plot.

Sunday was our first proper visit back to the allotment. We had been waiting to borrow Josh’s auntie’s petrol strimmer; as we don’t have an electric supply there. Not only that, Josh had to learn how to use it the week before when he was helping clean up his grandma’s garden.

I was soooo excited. Josh had promised me the weekend before to go down, but the weekend before was the first weekend I’m sure a lot of women became football widows, start of the football season. Boooooo!!!!!  So when I knew we were definitely going I was like a kid going to Disney, yes very sad I know, it’s just a bit of gardening. But the thought of cleaning my allotment ready for all the beaut veg Ill hopefully be picking next year, makes me soooooo happy and excited!!

So Sunday, even though we were a little tender from a friend’s house warming the day before, we packed up the car. Petrol strimmer, oil, petrol, sheers and a lunch box to pick some berries I was hoping had blossomed (is that even the correct terminology, I’m still learning the correct terms).

We arrived and we couldn’t even get in, the Blackberry bushes has grown so much in the few weeks that they had grown and tangled over the gate. However  with a good few forceful pushes we got in.

You’ll see in the video Josh getting going with the strimmer, he did quite a lot consider the how heavy and awkward the strimmer is, AND with a delayed hangover kicking in. It’s amazing how well a piece of spinning string can destruct the forest we had so well.

While he did the strimming I got on with picking blackberries, as you do, I didn’t want them to get ruined!! Jokes, I ran out of lunch box space, when I asked josh to grab me a lunch box on the way out of the house, I hadn’t realized he picked the smallest one in the cupboard which held like 10 berries, so my job for the rest if this week is to go pick the rest. I have some ideas to make some jam and blackberries Bakewell tart. So I’ll get the recipes and pictures loaded.

So seriously i did the back breaking job of snipping down the berry bushes that hadn’t any berries on them and nettle bushes clogging up near the gate and fences. So I snipped away and started a pile of trimmings, which I then scooped up and took to the communal compost bin. I didn’t anticipate getting tangled up as much as I did, them thorns dig into anything they possibly can, it was like fighting a spiky octopus!!! I came out on top anyways, apart from a few nettle stings on my hand where the giant gloves kept sliding off.

We had a little break after about an hour and half and fought through the rest of the forest to the other end of the plot to see what else was hiding under all the grass.

Well, we have been lucky, there were grape bushes or tree’s, which ever one grapes grow on, but surprise surprise they were surrounded by nettles, the blooming weeding blighters!!

We also luckily have a massive pile of wood pallets at the bottom of the garden which thankfully means we don’t need to go scrounging from any builders now. The plan is to use them to make raised beds, which we’re planning to build ourselves. I say we, most likely Josh will macholy (is that a word?) want to use the drill and ill probs just take lots of photos and encourage from the side-line.

Then here comes the best bit, we met our neighbours, lovely people,  who welcomed us with a big tray of broad beans, turnips and the biggest courgette I have even seen in my life!! I was literally the same length and width of my forearm; I can NOT wait to cook that bad boy!!! We got chatting about vegetable, obviously, and thankfully they’re novices too and he was telling us that he is always trial and testing new veg, even broad beans even though he doesn’t like them. One man’s loss is another man’s gain they say, so I’m going to gratefully have so much fun peeling pods and researching and trying recipes.

In mentioned conversation is where we found out the blossoming pear and giant apple tree is ours. We thought it belonged to said neighbour, as the fence had fallen down. Literally I was so excited when he told us they were ours. There was sooooo many apple and pears on them, not ready to pick as yet but when they are, I can just feel it already; they’re going to be delicious. 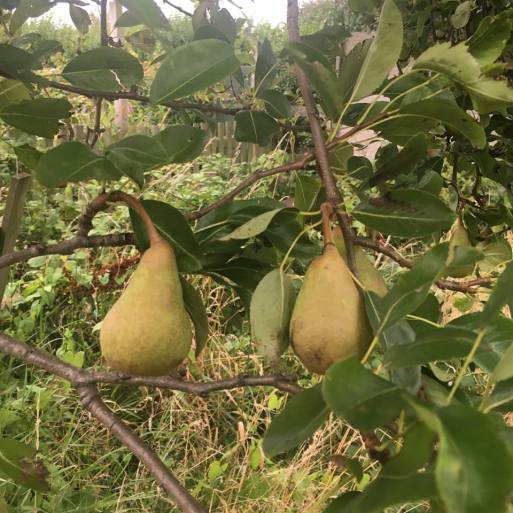 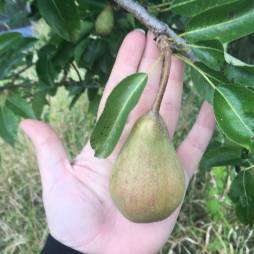 Aaaand that’s where the allotment trip ended, once we’d been distracted, there was no starting again, so after about an hour and half of strimming, snipping and chatting we headed back home to show off our gifts.

So over the Autum and Winter is when the allotment will be transformed ready for the spring. I will keep you all updated with pictures. I have made a calendar so I know; in which month what I can sow inside and outside, what can be planted and when to be harvested. I can start sowing for cabbages and lettuces and garlic in September, so as long as we manage to get a couple raised beds made then fingers crossed we can get them started.