It’s not Christmas without the consumption of at least one mince pie!!! Not for me anyways, I can’t wait for these to hit the supermarkets, though does anybody else fee like Christmas hit us very early this year, like straighter after Halloween.

Anyways, this very easy recipe to make in one pan and the prefect filling for Santa’s favourite snack. Just enough time to make some for Christmas Eve and the ingredients can be bought in any supermarket.

I wanted to try and mix up the traditional flavour  so have come up with Cherry and Almond Mincemeat and Orange and walnut Mincemeat, they still taste very similar to the traditional Mincemeat but with a hint of something a little extra special. They are so tasty that, when my mother came round the day after I made the mixture, she tried some that I’d kept for myself and she nearly ate the whole lot from the jar. She tried the cherry first and was adamant that was her fave one she’s ever tried, I told her to try the orange one, but refused until I talked her round. She now states the orange is her new fave, the cherry a close second Obviously!!

I love the idea of the mince pies with the frangipane top that are being sold in some of the supermarkets, so I reckon the Cherry and almond one would work well with frangipane. Lucky for you guys, I’ve made a frangipane recipe already, so head back over to the blackberry Bakewell tart and just follow the instructions for the frangipane mixture. 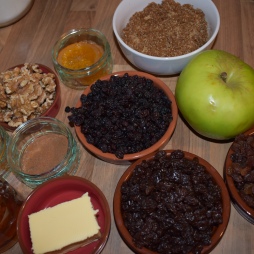 Ingredients for the Cherry and Almond Mincemeat

½ of large Bamley apple either grated or very finely cubed.

Zest and juice of one lemon

½ teaspoon each of cinnamon and nutmeg

Ingredients for the Orange and Walnut Mincemeat

½ of large Bamley apple either grated or very finely cubed.

Zest and juice of one orange

100ml of Triple sec or Cointreau

½ teaspoon each of cinnamon and allspice